A study just released by the Pew Charitable Trusts (http://goo.gl/S2Mufe) uses Reinvestment Fund’s Displacement Risk Ratio (DRR) to analyze gentrification and other types of neighborhood change in Philadelphia since the year 2000. The report found that gentrification, when defined as a neighborhood’s shift from a mostly low-income population to a middle or high-income one, was relatively limited. It also found that the speed and scope of the process varied substantially from one gentrified neighborhood to another. The DRR (referred to as the ‘affordability index’ in the report), was essential to understanding those variations, and the implications for longtime residents

The DRR compares changing residential sales prices over time with the inflation-adjusted median income of residents at a fixed starting point. The ratio is a test of whether the typical household living there at the outset could afford to buy a home there at a later time. A score over 3.0 is considered unaffordable, and a negative value, which can result from the index’s adjustment for citywide price trends, indicates deep affordability.

DRR values in the 15 tracts that Pew identified as gentrified ranged from close to zero to over 7.1.

In neighborhoods that were predominantly working-class African-American before gentrification, the DRR indicated that home prices were generally out of reach of longtime residents. In contrast, in gentrified areas that had been largely white, where there were also higher homeownership rates, prices remained generally affordable (see chart).

Gentrification is a hot topic in many cities, and this analysis grounds the discussion in a series of data measures. The study is getting a lot of attention, in the Philadelphia Inquirer (http://goo.gl/rNlFfH), on the radio, and on a number of blogs. 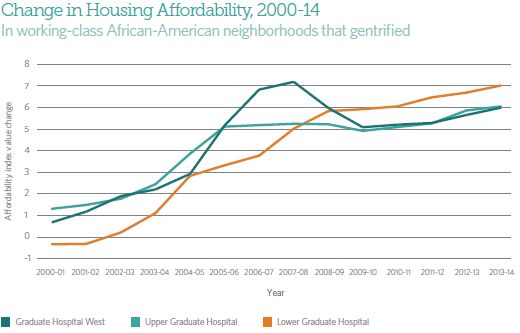