In recent years, community development professionals have focused increased attention on the role the arts and culture might play in stimulating community revitalization. Academics like Richard Florida have stoked this interest by arguing that creative professionals are the key ingredient for regional development, while the federal government and philanthropy have promoted creative placemaking as a strategy for integrating the arts and design into the urban (and rural) fabric.

Yet, the news has not been all good. At the same time that many observers promote the arts as a magic bullet for cities’ problems, others have suggested that the arts may create as many problems as they solve. The G-word, gentrification, usually crops up in these conversations. “Creatives” from this perspective are seen as the stalking horses for the process of revitalization, driving out legacy residents, and opening areas for more upscale development.

Certainly there are examples to support both of these cases. Yet, it is wise to keep a sense of proportion. For every New York or San Francisco, where issues of affordability have reached a crisis proportion, we can point to dozens of small or medium size cities in which problems of vacancy and decline are of greater concern than gentrification. Meanwhile, the clamor from advocates of one position or the other has occurred generally without the benefit of evidence, which links culture and development.

Penn’s Social Impact of the Arts Project (SIAP) has been collaborating with Reinvestment Fund to study the connection of the arts and community revitalization for the last decade. SIAP has constructed measures of cultural assets—nonprofit cultural organizations, for-profit firms, resident artists, and cultural participants—at the neighborhood level since the 1990s. These separate measures are then combined into a cultural asset index (CAI) that gives us a single measure of a neighborhood’s cultural ecology. 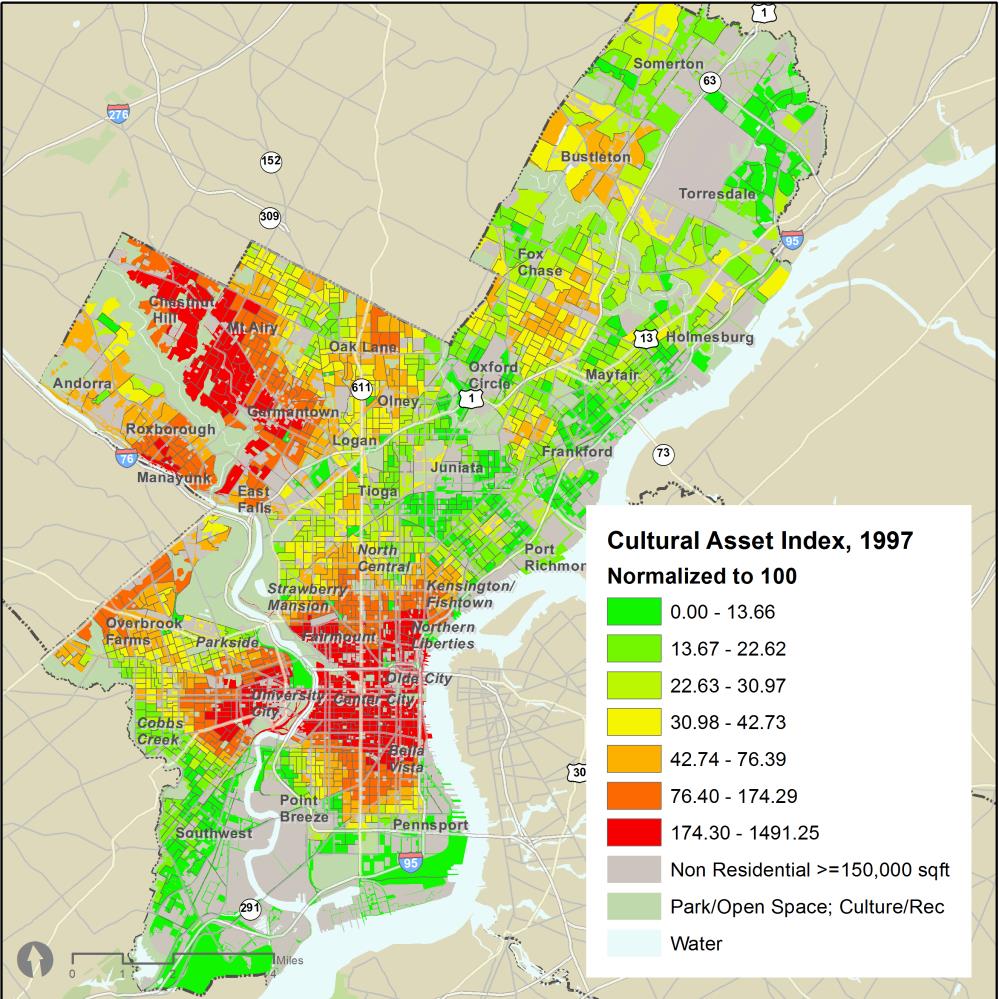 At the same time, many less-advantaged neighborhoods with many cultural resources saw their housing markets improve during the first decade of the 21st century. Here we used the Reinvestment Fund’s Market Value Analysis (MVA) as our index of housing market status. The Fund has updated its MVA several times since the original 2001 version, most recently in 2015.

Below we compare how neighborhoods were classified in 2001 and 2011. Because the categories vary somewhat between years, we only paid attention to a shift in status if a neighborhood moved up or down by two or more categories. Across the city, more than three-fourths of the block groups remained stable or didn’t change by more than one category. One in five block groups improved its MVA score, while only three percent declined.

We discovered that block groups that improved during the decade consistently had CAI scores in the late 1990s that were higher than other block groups in their MVA stratum. For example, while the average “transitional steady” or “transitional down” block group’s CAI score was 95 (indicating that it was near the citywide average), the block groups in this category that improved between 2001 and 2011 had a CAI of 280, 2.8 times the citywide average. This pattern held across all categories; neighborhoods that improved during the decade had higher than average cultural asset scores in the late 1990s.

The evidence from Philadelphia points to a significant relationship between a neighborhood’s cultural ecology and its prospects for revitalization. Certainly some of the neighborhoods that benefited from this relationship have experienced displacement, but our field research suggests that this isn’t the only consequence of an improved housing market. What is more, our research suggests that the presence of cultural resources is associated with higher measures of other dimensions of social wellbeing, including child welfare, personal health, and security outcomes.

We would love to know if any of you are measuring arts and cultural activity in your cities and what role cultural assets play in your community development initiatives.