Des Moines, Iowa represents a tale of two cities. While downtown Des Moines is enjoying a renaissance of sorts—with significant investments made over the last two years in economic development, job growth, and quality-of-life improvements—a group of eight diverse neighborhoods on the northern edge of downtown, which are all part of the 50314 ZIP code, have yet to see the same energy pouring into revitalization.

Home to 18,000 residents, 50314 has a 35 percent poverty rate and a median household income of $30,557, compared to $59,381 for the region. About 55 percent of those who live there are persons of color, compared to 12 percent for the metropolitan area, and 24 percent are Hispanic, compared to less than 10 percent for all of Des Moines. Only a third of the black households own their own homes, compared to 72 percent of white households.

Laura Graham, assistant to the city manager, moved to 50314’s River Bend neighborhood in 2007. She and her partner were looking for a diverse, inclusive, and affordable community close to downtown with access to Des Moines’ trail system.

“This area of Des Moines is so full of potential. Many of our neighbors have lived here for decades. They’ll tell you it’s a better place today than it was 30 years ago, and we hope to continue that trend. My husband and I fell in love with a wrap around porch and a sizeable kitchen. Our global neighborhood is the icing on the cake.”

The 50314 community—one of the oldest in the city—boasts of stately Victorian houses dating from the late 1800s, but the majority of homes in these neighborhoods are below average in condition. Many have been converted into rental apartments. Most of the housing options in this part of the city are older and do not accommodate large families. Many residents of 50314 are rent burdened. “Because incomes are very low, most of it goes to rent,” says Josh Hellyer, policy and communications coordinator for the Polk County Housing Trust Fund, the planning, advocacy, and funding organization for county affordable housing. “This can be very stressful for residents because it means cutting back on food and medical care. These are the very real decisions that people in this neighborhood are trying to make.”

Infrastructure in this area of Des Moines is also aging— there are broken or missing sidewalks and a lack of shade trees and outdoor lighting. 50314 generally lacks a robust business district; restaurants are largely fast food chains and convenience stores; and there is a heavy concentration of social service organizations.

All of this is why Graham, Hellyer, and others have joined a team supported by Invest Health that is working to improve conditions in the community. Invest Health is a collaboration between the Robert Wood Johnson Foundation and Reinvestment Fund that provides opportunities for local leaders in the public and private sectors to work together in mid-size cities such as Des Moines on new initiatives aimed at improving health and well-being, especially in neighborhoods facing the biggest barriers to better health.

While downtown redevelopment efforts already are underway, the Des Moines Invest Health team aims to build upon them with deep involvement from residents of 50314. They plan to evaluate additional funding opportunities after they identify existing or planned projects that have the potential to reduce health-related problems in the community.

Team members are steered by the philosophy that the residents themselves are the ones who can best articulate their challenges and what they need. Erin Drinnin, another member of the Des Moines Invest Health team, and the community impact officer for health at United Way of Central Iowa, agrees.

“We want this to be a community-driven initiative. We want to be careful not to be prescriptive about our community. Powerlessness is a social determinant of health. When people don’t have control over decisions that are made about where they live, that can poorly influence their health.” 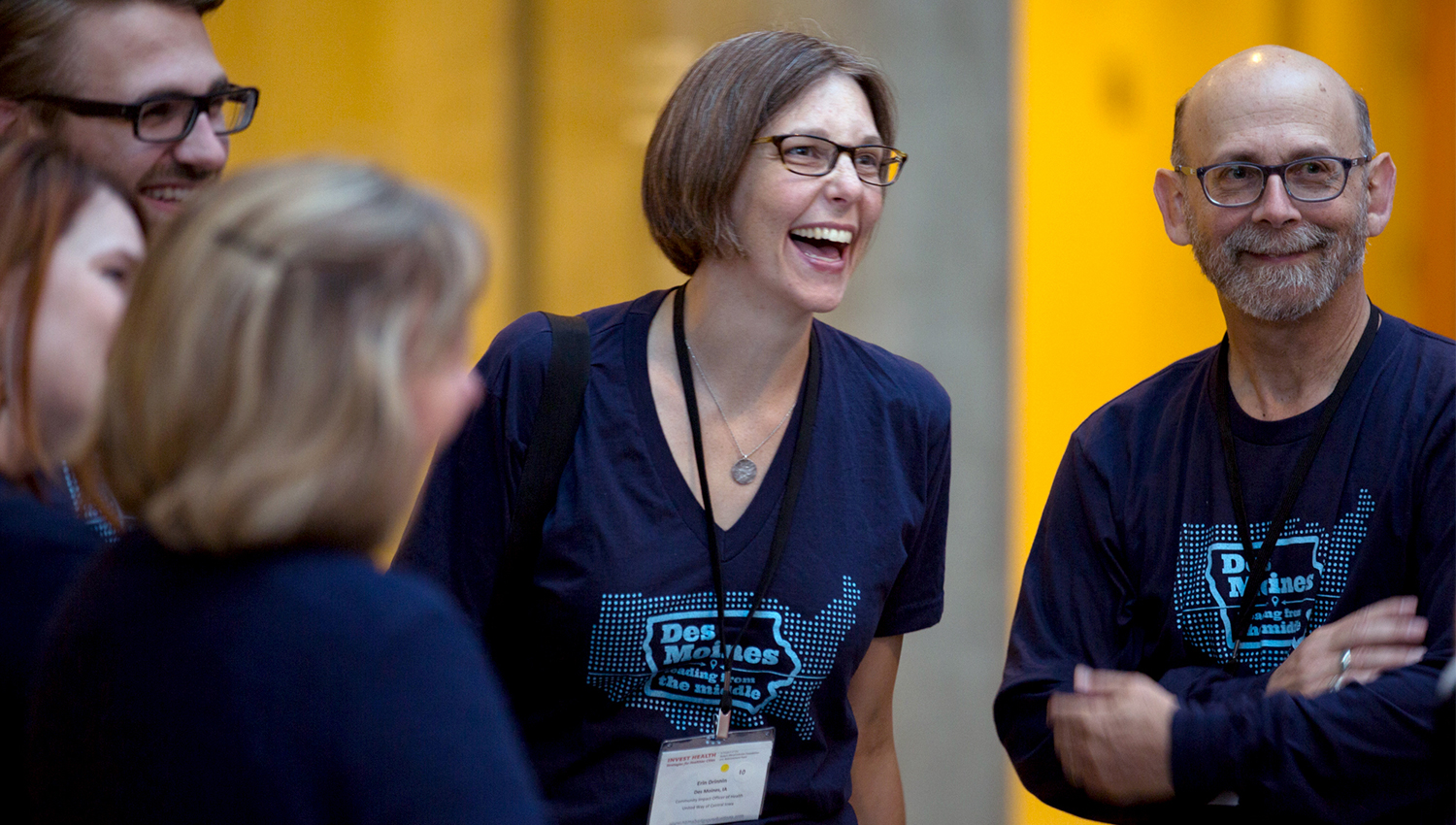 To this end, the team has sponsored a series of surveys and neighborhood meetings with people who live in 50314 about changes they believe will improve life for them and their families. The team will develop an action plan based on the many suggestions that come from these interactions.

The first survey, completed by 103 residents of 50314, indicated that walking—which means having clean, safe sidewalks that promote physical activity—topped the list of issues of most importance to residents, followed closely by affordable housing and access to healthy food, and finally, encouragement of new business. Also, some of the open-ended comments discussed safety and biking and the need for food desert maps, a housing quality index, sidewalk maps, and a business inventory.

“The residents told us they want to live in neighborhoods that are well-lit so their kids can play outside, and live in affordable housing so the neighborhood is stable,” says Rick Kozin, another Invest Health team member and Polk County’s director of public health. “They want to access medical care that they can get to easily.”

The Invest Health team plans to work with AMOS, a community outreach organization, to ramp up outreach this year by holding hundreds of additional conversations in 50314 over the coming months. The team believes it is critical for community members to have a stake in the outcome—and to know upfront that they do.

“There are people who live here because they have always lived here, and others, like me, who moved here from somewhere else,” Graham says. “But regardless of who we are or where we came from, we all benefit from working together to make the neighborhood a healthier place.”