Located along the LaSalle Street corridor in the Central City neighborhood of New Orleans, a historically Black part of the city, is the Dew Drop Inn. Opened in 1939 by Frank Painia, what started as a barbershop quickly grew into a well-known hotel and music venue, complete with a restaurant and bar. Listed in the Green Book, the guide for Black travelers in segregated America, the Dew Drop Inn is now considered a historic landmark.

Over time, the business grew with the addition of the restaurant, opened by his brother, Paul, as well as the hotel, which boomed during World War II. During this time, Frank started to host musicians in the lobby of the hotel. Artists such as Ray Charles, Little Richard, Etta James, James Brown, Sam Cooke, and many more, were drawn to this hot spot. Unfortunately, though, as segregation ended, so did the success of the Dew Drop Inn. The business, which was already declining, floundered after Frank Painia’s death in 1972, and the property has sat vacant since hurricane Katrina in 2005.

The National Register of Historic Places, a list of districts, sites, buildings, structures and objects deemed worthy of preservation for their historical significance, only contains a few sites that are related to African American experiences. In 2017, The National Trust for Historic Preservation launched the African American Culture Heritage Action Fund to recognize more sites that are meaningful to Black Americans. In 2022, the Dew Drop Inn was added to this list.

Recognizing the need to restore this New Orleans cultural gem that thrived during the 40s, and 50s, Black developer Curtis Doucette Jr. purchased the property in hopes of reactivating the property as an important neighborhood attraction. Working with local historical preservationists, Doucette not only aims to preserve the exterior appearance and return it to use as a nightclub, but also display artifacts of the Dew Drop Inn’s history as a central gathering place for the Black community.

The overall $10 million project will utilize federal and state Historic Tax Credits (HTC) as well as federal and state New Market Tax Credits (NMTC).  Stonehenge Capital is the HTC investor for this project and U.S. Bank is providing the NMTC investment. Other funding sources include $1.9 million from Reinvestment Fund and $1.9 million from Blue Hub Capital, which are serving as a bridge to public sector capital sources: $3.625 million from PROP (state of LA) as well as $900,000 from the New Orleans Redevelopment Authority.

The proposed project will turn the space into a 17-room boutique hotel, complete with a 3,000 square foot live music venue, event rental space, and a pool allowing general public access with passes or memberships. Located in Orleans Parish, a persistent poverty county where the majority of residents are Black, the restoration of the Dew Drop Inn is part of a concentrated effort to revitalize Central City. As this neighborhood is home to New Orleans’ brass band and Mardi Gras Indian traditions, this project will aim to attract notable musicians back to the Dew Drop Inn and surrounding area.

The project will be restored to the Secretary of the Interior’s standards for rehabilitation, ensuring its consistency with the historical character of the structure and the surrounding neighborhood. This project team recognizes both the physical and cultural value of the building and will ensure that the facade, signage, interior features, and key artifacts will be respectfully maintained and restored. This work will maintain the existing layout of the property, with the nightclub, hotel lobby, and a small number of guestrooms on the ground floor while the majority of guest rooms will be on the second floor.

Doucette, who purchased the building from the descendants of the original business owner, will help to honor the Dew Drop Inn’s legacy through this project. Not only will this endeavor help revive the music scene in this area, but it will also bring attention to the greater revitalization efforts taking place throughout the corridor including significant investment in affordable housing preservation and development.

Some of the most exciting revitalization projects in the corridor include Café Reconcile, a nonprofit restaurant in Central City, is nationally known for its job training and supportive programming for young adults and Ashé Cultural Arts Center, which serves as the cultural institution for New Orleans. The Center is a Black-operated gallery, theater, and community gathering place located in Central City due west of the Dew Drop Inn.

The reopening of the historic Dew Drop Inn will be a catalyst in the Central City neighborhood; it has already secured a Rock and Roll history museum as its next venture, which will also be located along the LaSalle Corridor. By investing in this project, Reinvestment Fund is investing in reviving a part of arts and cultural history that developed so much of the music we know today.

See more of our work in the Southeast here.

The Dew Drop Inn held a groundbreaking ceremony in June 2022. Reinvestment Fund’s borrower, developer Curtis Doucette Jr., spoke to attendees about his hopes for the project. Working with local historical preservationists, Doucette not only aims to preserve the exterior appearance and return it to use as a nightclub, but also display artifacts of the Dew Drop Inn’s history as a central gathering place for the Black community. 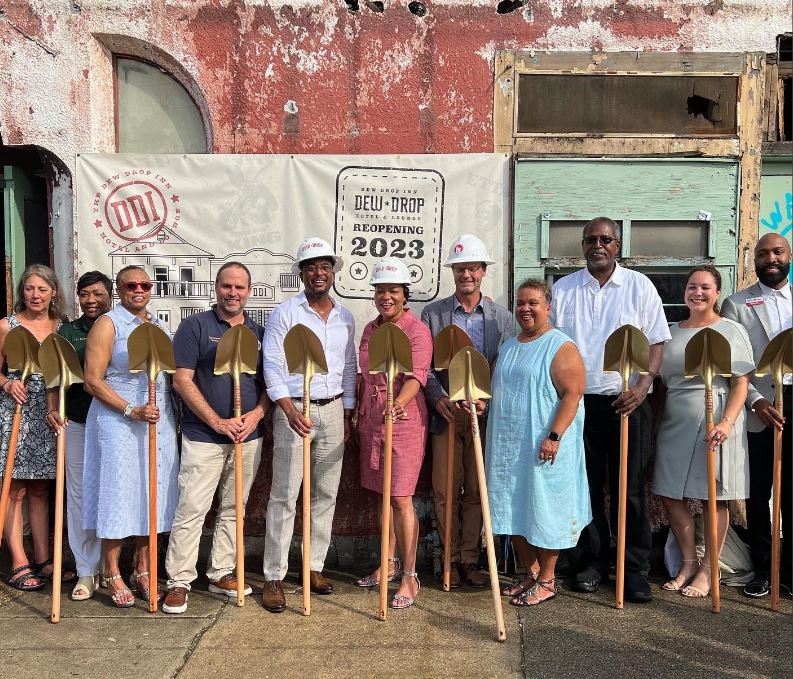 Community leaders, project stakeholders and community members came together to celebrate the groundbreaking ceremony for the restoration of the Dew Drop Inn. (Nancy Wagner-Hislip, of Reinvestment Fund, pictured far left)